un Projects is based on the unceded sovereign land and waters of the Wurundjeri and Boon Wurrung people of the Kulin Nation; we pay our respects to their Elders, past, present and emerging.
un Projects
⟽
un 6.2 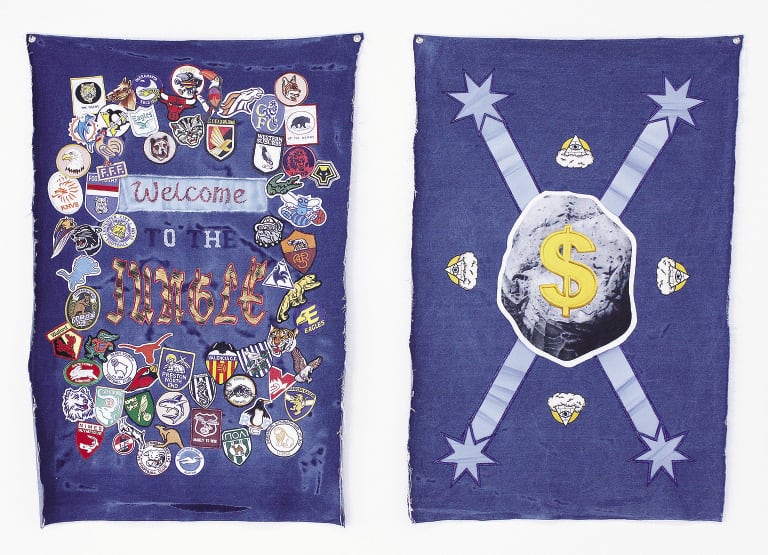 These days anyone can resist, but, in a world of global capital, it’s very difficult not to be unintentionally hypocritical: you sign a petition online, whilst buying shoes made by children in sweatshops, while Occupy protestors fight back against the one per cent of wealth owners, at the same time as utilising social media platforms worth over 100 billion to organise themselves.

I’m not saying we shouldn’t strive to be better (changes happen everyday, brought about by the people), but it is the aforementioned irony of rebellion in the so-called First World that interests Garifalakis and Moore in their exhibition Denimism. The duo have each made five denim wall hangings that drape in a military-style rank, akin to a picket line, on the wall of West Space’s Gallery One. These banners uniformly share denim as their foundation, which in turn also instantly links in solidarity with historical cultural underdogs (labourers, rebels, motorcyclists, gangs, outlaws) also associated with the hardwearing fabric.

Using this façade of protest, the duo have consolidated a range of counter-culture tropes, and related aesthetics, to create works adorned with imagery that highlights the potential hostility of niche groups against outsiders: the mascots and insignias of sports teams in Moore’s work Welcome to the Jungle 2012, and spelling out ‘haters’ in the iconic Star Wars font found in Garifalakis’ Haters 2012. The borrowing of mixed-media references and its related trappings (rivets, large stitching, studs, chains) point to the broad band of cultural underdogs also associated with denim (bikers and gang members).

Many rebels, revolutionaries and general anti-heroes end up as commercial poster-babes of general defiance (or, at the very least, spread the feel-good message of believing in yourself) in order to sell T-shirts, Disney films, even websites (see Che Guevara, 1928–1967; Hua Mulan, Northern Wei dynasty, 386–534; John Lennon, 1940–1980; Edward ‘Ned’ Kelly, 1855–1880; Guy Fawkes, 1570–1606; Julian Assange, 1971–) and unfortunately become inert and fictionalised through saleable dramatisation and the fuzzy distortion of history.

The materials used in the exhibition (which are only imitated by Moore in his clever charade of representing materials through tromp l’oeil painting, and Garifalakis’ use of mixed media) also go through a similar process of having their power divested: a Crips gang coloured bandana hangs flaccidly on a length of chain, the loyalty-laden motifs of embroidered patches are reduced to ghostly-flattened painted fakes, metal studs point out from the wall harmlessly in the safe, controlled and stark environment of the gallery. Even the violence alluded to in Garifalakis’ texts (i.e., ‘Rob ’em, Fuck ’em, Kill ’em’) is softened by their skilfully stitched and clean presentation, all which nullifies the dangerous gravitas of the messages.

It becomes apparent very quickly that the banners are devoid of any actual cause and merely show off the dressings and visual language of defiance associated with the counter-cultures of the past, essentially posers adopting a readily available styling. The authority surrounding these stylistic devices has dissipated over time; they are just husks of their former selves. Garifalakis and Moore recognise that these objects and the visual language within them is in many ways (if not entirely) functionally obsolete (outside of ironic use) and simply combine them in different ways to present them as a stylisticly themed palette without any allegiances. These days anyone can resist, or at least channel an aesthetic simulation.

Ace Wagstaff is a Melbourne-based artist and writer.