un Projects is based on the unceded sovereign land and waters of the Wurundjeri and Boon Wurrung people of the Kulin Nation; we pay our respects to their Elders, past, present and emerging.
un Projects
⟵
un 6.2 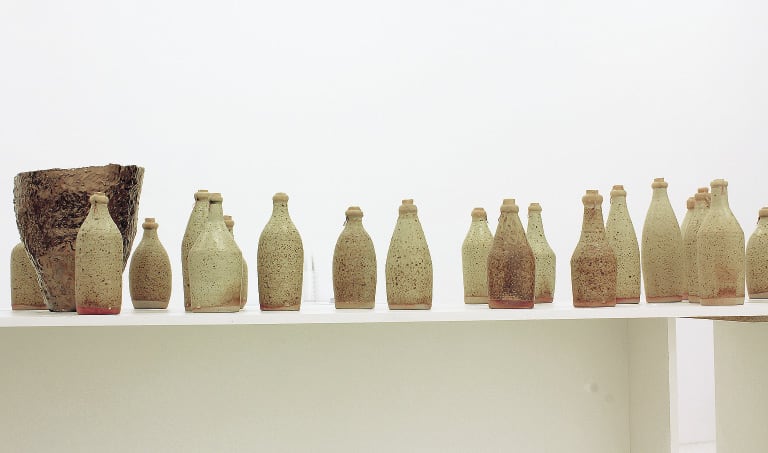 Jacob Ogden Smith’s brew is a fruity dark ale, robust but with a subtle complexity of flavour that reveals itself slowly over the course of sustained consumption. Its faint floral notes are underscored by an almost citrus bitterness and rich malt tones, making it an ideal accompaniment to a ploughman’s lunch of sharp cheddar and piquant, vinegary gherkins. Be warned though, it packs a wallop and might not be the ideal tipple for a Sunday session.

Staff writer positions for the glossy lifestyle lift-outs of our weekend papers are jealously guarded and I had begun to fear that my insightful ruminations on booze were destined to be wasted on a succession of glassy-eyed dining companions, whose ability to feign interest was inexpert at best. Fortunately, Jacob Ogden Smith’s exhibition Hovea Pottery Ale at OK Gallery has afforded me the opportunity to flex my atrophied beer-reviewing muscle. For this exhibition, the artist crafted a range of hand-turned, ceramic beer bottles and filled them with his own artisanal homebrew. Each bottle is unique: some resemble an engorged stubby, while others, with their tapered necks and bulging shoulders, are like a miniature, cartoon amphora. Sealed with beeswax and arranged haphazardly on a central table, these vessels formed the centrepiece of the exhibition. A refrigerated keg offered punters a free sample and some gaudily glazed hand-coiled pots were kept on hand to catch the dregs.

Aware that opening night crowds gather as much for the complimentary refreshments as they do for the unveiling of a new body of work, Smith has turned the customary free beer into the work itself. But this is no glib joke; an accompanying video, This is How We Do It 2012, details the laborious processes involved in putting such a show together. The artist, with his hand in each and every stage of the work’s creation — from the harvesting of the wild yeast needed to kick-start the fermentation process, to building the kilns in which the bottles are fired — presents us with a strange yet harmonious marriage between cottage industry aesthetic and a survivalist-style ethos of self-sufficiency.

Included in Here and Now at the Lawrence Wilson Gallery, a recent survey exhibition of young Western Australian artists, Jacob Ogden Smith’s practice is dedicated to reconnecting the ceramic form with the specific cultural contexts that it developed out of. He does not shy away from the functional, nor does he fear that any acknowledgement of utilitarian purpose will invalidate the object’s claim as a work of art. Alongside this explicit awareness of the discipline’s history, Smith also seeks to weave ceramics into a conversation about contemporary popular culture. This Is How We Do It is scored by an instrumental version of Montell Jordan’s song of the same name, its tempo transforming the traditional, repetitive processes of pottery and brewing into something akin to an aerobics video.

In last year’s group exhibition Wilderness Years, also at OK Gallery, Smith contributed America’s Cup 2011, a wonkily precise rendering of the famous trophy in lusterware ceramic. It was accompanied by a ‘purple drank’ version of Icehouse’s ‘Great Southern Land’ and a similarly cough-syrup-slow video of Australia II winning the yacht race off the coast of Fremantle. This droning soundtrack imbued the piece of pottery with a sense of sinister nostalgia, like a laurel wreath turned to rotten vegetable matter from being too long rested upon.

Like scoring a period film with a trendy modern soundtrack, Smith’s practice simultaneously salutes ceramic’s practical, crafty origins while invigorating it with a distinctly contemporary flavour. The tried and true Bacchanalian combo of booze, tunes and pottery is set reeling to a new rhythm.

Andrew Purvis is Perth-based a writer, artist and academic.