un Projects is based on the unceded sovereign land and waters of the Wurundjeri and Boon Wurrung people of the Kulin Nation; we pay our respects to their Elders, past, present and emerging.
un Projects
⥞
un 6.2 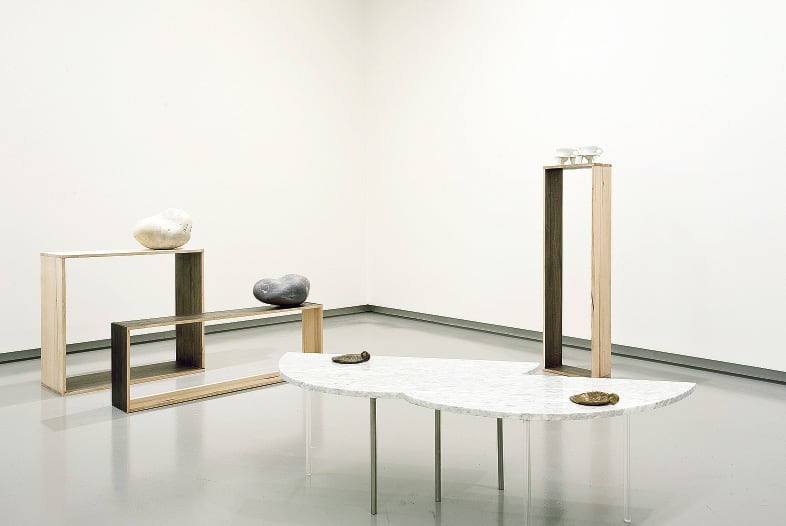 In the changing consideration of the artistic ‘object’ beyond it’s physicality alone, many artists and critics have sought to contemporise the practice of sculpture by emphasising its broader social context as being indispensible to new modes of postmodern critical engagement. As far back as 1979, Rosalind Krauss noted that sculpture, as we know it, had become ‘infinitely malleable’.1 Pretty Air and Useful Things reflected this malleability in a number of ways, the most profound of which lay in the curatorial focus of spatial experiences and the social contexts of artistic objects. In attempting to reconcile conceptual concerns raised by sculpture’s expanded field with a minimalist formal language, curator Rosemary Forde suggested a unique framework for considering the sculptural; the heart of which lies in our ability to critically engage with artistic objects and their shared space.

Making reference to the space around the object, MUMA’s tiny Project Space gallery immediately implicated the viewer in the relationship that the sculptural objects shared with their environment, becoming essential to what Forde described as the ‘breathing space between subject and object’.2 Pretty Air forged a new brand of social capital whereby the freedom of the desiring subject is manifest. Indeed, this transference between objects and their surroundings constituted a large part of the shared visual language of Dan Bell, Sanné Mestrom and Alex Vivian.

Alex Vivian’s denim wall rubbing People were here (again)… presence, etc. Can you smell them? 2012, embodied this idea quite literally, replicating the scuffs and scrapes left behind by gallery-goers as they pass through the space. Vivian’s piece monopolised an entire gallery wall, emulating the transference between body, space and object. The suggestion of the bodily within the gallery insists that artistic objects do not exist within a vacuum. Rather it is their social context and what we as social beings bring to the gallery — our hierarchies of value and taste — that activate them. It is through this rupturing of the hermetic preserve of the white cube that we’re reminded that the gallery is not sanctimonious, nor is it sterilised against the outside world. Our pervasive presence does not disrupt the space. It is in fact activated in a way that positions our gaze as active and constructive, rather than passive and consumptive.

In many ways, these three artists’ works ironically found a harmony in their conceptual disjuncture: the works both depended on and undermined the value established by modernism and its sculptural undertakings. Sanné Mestrom’s commitment to a dialogue between the established and the experimental took shape in her use of quintessentially modernist sculptural materials such as marble, timber and bronze in Muse 1 2012, Muse 2 2012 and Grosenberg 2012. Grosenberg in particular presented a nuanced dialogued between traditional materials and modern design. In this work, a low table made from two misaligned semi-circles undermines the traditional functionality of the design through its awkward height and bronze castings. The title, with its reference to two giants of modern art theory, questioned the value we associate with historical hierarchies. Yet this nod to an earlier moment in art history did not deny the strength of the lineage of modern art, but rather carved a critical consideration of contemporary sculpture beyond its physical integrity.

Rather than using materials that we have come to associate with the great masters of modern art and design, Dan Bell works with found objects to reveal ways in which we value the physicality of sculpture. A velvet rope and an elegant dress scarf were hung on the wall below the traditional eye-level gallery hang; the title 100% off 2012 further undermined notions of established taste, with 100% off being made entirely from found and stolen items. By excluding himself from traditional modes of monetary exchange, yet utilising a visual language of style and elegance, Bell’s Duchampian venture undermined the modernist imperative for each medium to be defined in relation to the materials through which it was expressed.

Far from sculpture being a dusty relic of modernism, Pretty Air and Useful Things presented a vastly expanded account of contemporary sculptural practice that encouraged artistic objects to be considered as part of a broader social context. In using modernist resistance to the anthropomorphising of sculpture as its critical counterpoint, the works of Vivian, Bell and Mestrom seek to rectify the shortcomings of modernism’s genealogy of flatness, paving new roads to the contemporary.

Alexandra Johnson is studying a Bachelor of Arts (Art History) at the University of Melbourne.