un Projects is based on the unceded sovereign land and waters of the Wurundjeri and Boon Wurrung people of the Kulin Nation; we pay our respects to their Elders, past, present and emerging.
un Projects
ᑉ
un 6.2 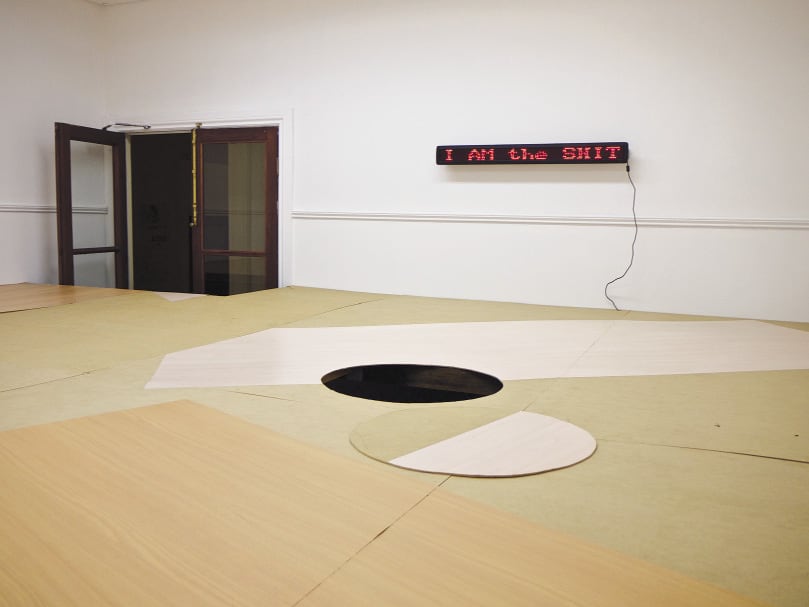 David M Thomas’ recent exhibition Party Disguised as Work or Work Disguised as a Party at Boxcopy in Brisbane presented an exhibition where art is neither all work nor all play. As an artist who works with a variety of media and materials, Thomas’ most recent installation, Party, follows this multi-faceted trend. By offering a space where the sitter could filter and choose from a variety of influences and symbolic orders, ranging from Thomas’ history of movie watching, music listening and manner of artistic practice, the installation constituted a sitter’s experience as one that was individually directed and voluntarily extensive.

Crouching underneath a false floor that horizontally split the gallery space in half, the viewer was forced to move between two distinct spaces. The room above was almost empty except for the declarative red LED signage that yelled ‘I AM the SHIT’, and was more closely reminiscent of the ‘white cube’ notion of gallery spaces. Thomas’ false floor made this gallery arena accessible only by small man-holes. By moving the circular man-holes aside, the viewer could only inhabit this space in partiality, with the head alone. Under this false floor, which also acted as a ceiling, Thomas’ installation merged into a darkened space, heavy with the scent of hessian and the sounds and images of a lifetime of collected audio and visual material. For Thomas, by allowing the sitter the choice of what to watch and listen to, combined with the cubby-hole-esque gallery-to-studio feel of the space, the emphasis of the installation became the subject’s active response to the artist’s delegated space. The essentially creative, playful process involved in navigating the potential mental, physical and sensorial states offered in this space became an experiment of choice, and a collaboration between the artist’s past and the viewer’s present.

Within the combined gallery and studio space that Thomas presents, the sense of connection and collaboration stems from choices made in agreement with the viewer: the different sources of audio and visual material, the stance adapted so as to move around the height-restricted space, and the choice to use the selected manholes leading out of the cave to a space laden with potential. By presenting the audience with an area of comfort and residency — an area comprised of elements assembled by the artist but left for manipulation by the viewer — one willingly opts into this space, conducting a layered occupation that takes on a meaning of its own making. Simultaneously, the integration of the nearby empty space above reminds the audience of the artist’s presence that, by its very nature, is intended for curation, viewing and critiquing. The artist’s presence is unobtrusive in its purposeful absence, yet there is still an acknowledgement of this creative space as one where the artist lingers as director and instigator. In this case, the death of the author (or the removal of the artist) does not mean that their influence is absent from the openings of contemplation they leave behind; rather, it provides the means for expression without enforcing a definitive conclusion.

The history of art carries along with it an obsession with the creative spaces of the artist and the search for absolute clarity behind the act of creativity plagues this. Thomas’ work takes the viewer into the heart of this normally private experience, transgressing spaces of private work and public exhibition. For the sitter, engaging with such an exhibition space, a space focused on amalgamating different places alongside different social and creative outcomes, the overall experience is one imbued with purposefully varying emotive responses: namely, curiosity derived from the freedom to manipulate the space, coupled with apprehension as to how to begin this process. Thomas’ work is conscious of its own distinctly complex nature. Just as Roland Barthes noted the importance of acknowledging the ebbing presence of the author to give life to new meanings in a text, so too does Thomas allow the sitter to improvise within this space, working within a creative playground drawn from innumerable centres and fringes of culture.

Claire Hielscher is a Brisbane-based freelance art writer and reviewer.